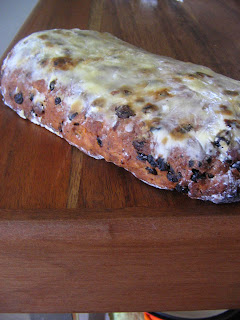 Christmas marks the beginning of the summer holiday period in New Zealand. This confounds many a visitor to the Southern Hemisphere. Many New Zealanders celebrate that which makes our Christmas so different to our Northern Hemisphere friends on the planet - there are amusing images of Santa wearing shorts and sporting a tan, reindeer wearing sunglasses, and kiwis on deck chairs knocking back beer...The New Zealand Christmas is one of barbecues, high sun and beaches.

That aside, there is one thing that does hold us back from totally embracing a distinct identity for noel. Our history is partly formed by colonisation of the English, Scottish and French. Many New Zealanders are but a few generations removed from Europe, thus the cultural ties are not totally severed or subverted. My good friend, the intellectually-ferocious and generous Anita, is an Australian of German descent; she and I are in the same boat when it comes to reconciling the amazing Christmas baking of the north with our southern humidity. Anita's grandparents have been kind to share their recipe for stollen.

Stollen is a fruit cake that is made either with cheese or yeast. As we could not find quark, we opted for a mix of cream cheese and ricotta.

Stollen
(by way of German tradition, care of Oma and Opa in Australia)

1) Preheat oven to 160 C/320 F.
2) Into a large bowl, sift together all-purpose flour and baking powder.
3) Add sugars, almond flavouring, run and eggs into flour mixture so that it is combined, then cut in butter until a paste-like substance is formed.
4) Knead cheeses, fruit, ground almonds and citrus peel into paste to make a smooth dough.
5) Separate into two logs. Open each log to place marzipan in the middle, then cover over again so that marzipan is wholly enclosed.
6) Place both loaves on a sheet pan lined with parchment paper.
7) Bake for 50-60 minutes until golden.
8) Once baked, brush loaves with melted butter and sprinkle over with icing sugar.

Do not be afraid to use ALL of the icing sugar. If you are going save the stollen to eat at a later time (which is wise, for it does mature), the icing sugar will be absorbed by the butter, creating a light, delectable icing. To save for later, wrap in foil, then in cling-film and store in a cupboard. 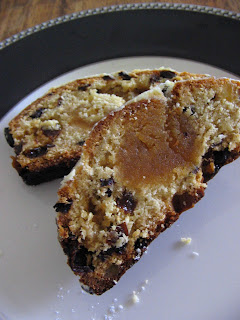 The interesting thing about stollen is that it does not use any mixed spices at all, which is quite traditional in British Christmas fare. However, it does taste of Christmas - dense, dark fruit and nutty almond flavours throughout. The stollen is light in texture yet rich in flavour. I prefer to eat it as it is, but it is also quite acceptable to eat it toasted with jam or other fruit preserves.

Comments:
Merry Xmas, dear Shaun!
I baked Stollen last year - this year has all been about English fruitcake - I've made three so far :)

yeah that's great .. We have many things in common ..Similar to my blog
www.786-articles.blogspot.com

Happy New Year to you and Eric!

I'm so glad I found your blog again! I used to write at ooohcake! but then stopped. Anyway, I'm so happy to see the recipes are still rolling in and everything looks even more delicious than before. :)

I received your comment on my strawberry shortcake post--so lovely to hear from you again.

Sending you email (to your blog yahoo acct)

I m so glad to visit this blog.This blog is really so amazing.Thanks for sharing with us.
clipping path

My angelheart Eric and I love cold climes. There is something inexplicably comforting about listening to the rain beat against the windows, the wind howl, and the clouds darken as all is aglow in the kitchen. Cold-weather cooking and entertaining inspire me. It is only since 2006 that I have really ventured into the kitchen - before then I shook the cocktails, chose the wine and made the occassional dessert. I found "my calling" while working on an honours dissertation in international relations whilst living in the US (from late 2001-early 2007); the kitchen has since become an environment in which to completely disconnect from academia. I am still finding my way through the kitchen - with the help of an acquired mass of cookery books. I would like to make the most of the seasonal produce available in Southern California and New Zealand to explore the endless possibilities of creating sustaining and occassionally decadent dishes. It is my hope to connect with other foodies who I hope will comment on my kitchen endeavours (and give advice!). Feel free to e-mail me: kitchenaglow.cookbooks AT gmail DOT com.